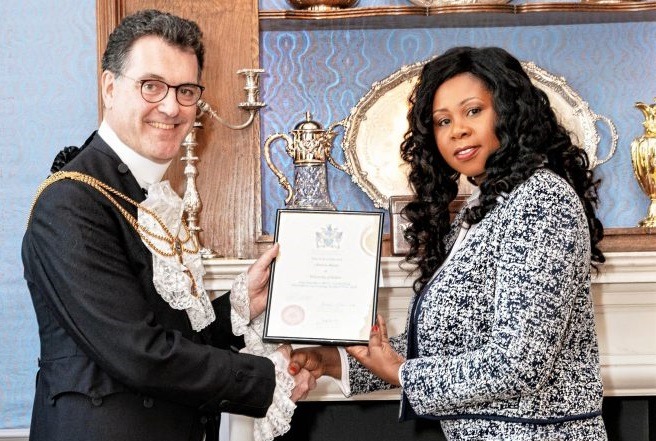 A University of Bolton student has been recognised as ‘outstanding’ at a prestigious ceremony in the City of London. Christine Banda was one of five students from universities in the UK to be named as a finalist in the Worshipful Company of Information Technologists (WCIT) Outstanding Information Technology Student Awards. Christine, who is in the third year of her Computer and Website Development (Hons) degree, was invited to the WCIT’s 103rd Business Lunch in the stunning Wax Chandlers’ Hall.

Criteria for the award included academic excellence, overcoming adversity, entrepreneurial skills, and contribution to charity or community. Christine, aged 40, is An African-born British citizen, who came to the UK in 2003. She is a mother of five children, aged between two and 18, and has worked hard to fit her studies around looking after her family. She initially studied for a Health and Social Care degree but felt that because of her passion for computing and website creation she wanted to change direction. Christine said: “It is a real challenge to fit studies around looking after the family, but I have managed it and I am here to try I inspire other mothers who feel that they may have missed out on education. “I want to tell people that it absolutely can be done. It needs hard work, passion and organisation, but it is possible. Education and learning is so important. “The University of Bolton has been very good and opened my eyes to a different world.” Christine will graduate in the summer. Brennan Tighe, Associate Teaching Professor from the University of Bolton’s School of Creative Technologies, who nominated Christine, said: “This award really demonstrates that our graduates punch above their weight. “Christine was up against some exceptionally strong competition and she has a determination and passion for the subject. “We are delivering transformative education. It means a lot to me personally to see people develop and transform.”

Twelve universities selected a candidate and provided a written citation in support of their nomination. Individuals from five universities made the final: as well as the University of Bolton, there were students from the University of Hertfordshire, Imperial College, London, Oxford University and Royal Holloway, University of London. The judging panel included the WCIT’s Master, Lady Parmley (Wendy); the Master of the Worshipful Company of Educators, Dr Lis Goodwin and the City of London Alderman and Sheriff, Vincent Keaveny. The awards were created to recognise outstanding undergraduate and postgraduate IT students within the UK.

The Research Institute for Social Mobility says "end the digital divide” with a ...