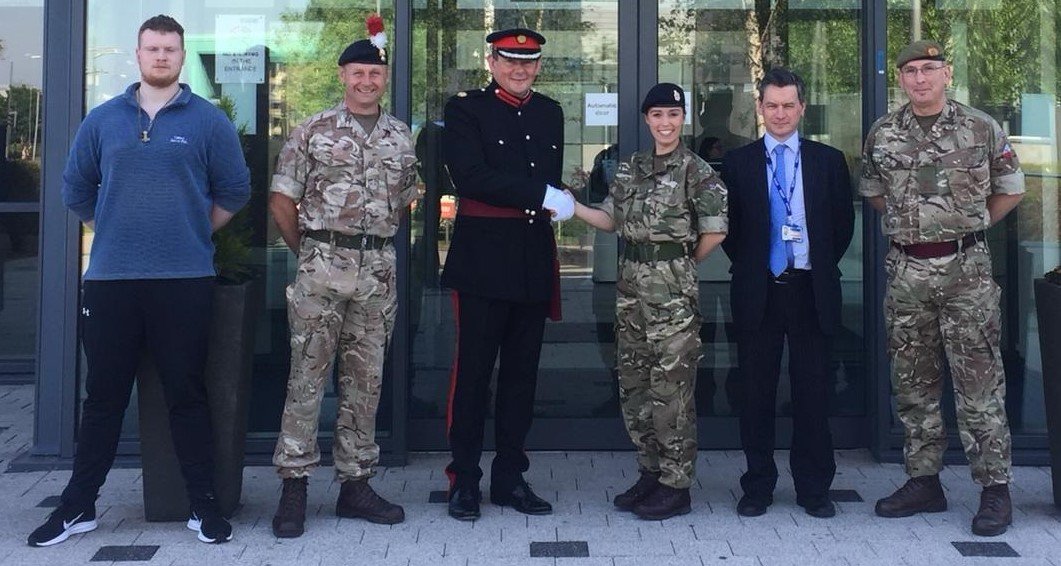 Reserves Day took place on Wednesday, 27th of June as part of the Armed Forces Week.

Jessica, who has served in the Army Reserves since last August, has been appointed as Armed Services Champion for the University of Bolton. She said: “Being in the Reserves offers huge opportunities in terms of the skills it teaches you that are transferrable to the workplace.”

The Reserve Forces make up around a sixth of the country’s Armed Forces personnel. Reservists are supporting operations all over the world, including in Afghanistan, Iraq, Bahrain, Estonia, South Sudan, Cyprus and Somalia.

The University of Bolton signed the Armed Forces Covenant in February 2017. It is a promise by the nation ensuring that those who serve, or have served, in the armed forces and their families, are treated fairly. Aligned with the Covenant is the Defence Employer Recognition Scheme (ERS), which encourages employers to support defence and inspire others to do the same.

The scheme encompasses bronze, silver and gold awards for employer organisations that pledge, demonstrate or advocate support to defence and the armed forces community, and align their values with the Armed Services Covenant. The University of Bolton has achieved bronze and silver awards and is now planning to push for the gold standard.

Prof Holmes said he was proud of the close relationship being forged with the Armed Forces. He said: “It is wonderful to see our staff and students getting involved and showing what opportunities there are by joining the Reserves. “The university is committed to providing the best opportunities possible to boost the employability of our students and this is yet another way we can help.”

Chris McClelland, HR Director said: “Having served for four years in the Reserves as an O/CDT in an infantry regiment myself I am acutely aware of the benefits and the transferable skills one develops. I am delighted that Jessica, as a serving member of the Reserves, has agreed to take on the voluntary role as Armed Services Champion for the university. Jessica will play a key role as we develop links and opportunities for our staff, our students and ex-service personnel.

“She will be our main liaison with the Armed Forces and also with potential and serving reservists at the university.”

For more information on the Armed Forces Reserves. visit here. Staff who are already members of the Reserves and wish to formally advise the university of this should contact Sara Williams in HR via slt2@bolton.ac.uk.