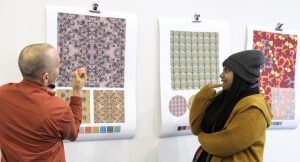 Curtains That Tell A Story:

A University of Bolton student has won a competition for her textile design to be part of a travelling mini arts centre, which will tour Greater Manchester this summer.

The competition was organised by Greater Manchester Arts and allowed students to work to a commission and work with award-winning artist Joshua Sofaer from the Cap & Dove project.

Students were given the task of responding to a brief set out by Joshua, inspired by the pattern books in the Bolton Museum & Archives.

First-year student Zaynah, aged 19, said she was “amazed” when her design was chosen as the winner. “It sounds like a cliché but when I won, I felt like I was in a dream. It was a total shock.”

She said: “This has been a fantastic experience, as it has given us an insight into what it is like actually in an industry setting, working to a specific brief and then producing a design within time constraints. I have really learned a lot.”

Joshua said: “Zaynah’s design has a contemporary layout but is inspired by the historical pattern making from the Peel pattern books in the Bolton archives

Joshua added: “Whilst researching at the archives at Bolton Museum, I discovered two early 19th Century pattern books. I also admired some beautifully upholstered furniture by students from the University of Bolton.”

“Seeing the two things together made me think wouldn’t it be wonderful for the students to design something in response to the pattern books. Also, what a great way this would be to celebrate and see Bolton’s rich industrial past inspiring the designers of tomorrow.”

Donna Claypool, Programme Leader at the University of Bolton, said: “At this level, it’s rare for students to work on such a prestigious project with an international artist. The whole process has been an excellent learning experience and it’s been fantastic to see their work come to life through the process.”

Zaynah is one of several Greater Manchester emerging and established artists to be collaborating with Joshua on the build, design and decoration of Cap & Dove, which will house a tiny theatre, museum and a shop.

You can see Zaynah’s winning curtain pattern design on Saturday 18 July when Cap & Dove visits Bolton during the Greater Manchester tour this summer as part of the Festival of Hope in the town centre.

Cap & Dove is commissioned by Greater Manchester Arts. The project is curated and produced by Rule of Threes. The commission is part of the Greater Manchester Combined Authority’s Great Place programme, funded by the Heritage Lottery Fund (HLF) and Arts Council England.

It’s a fine day to consider a Fine Art degree