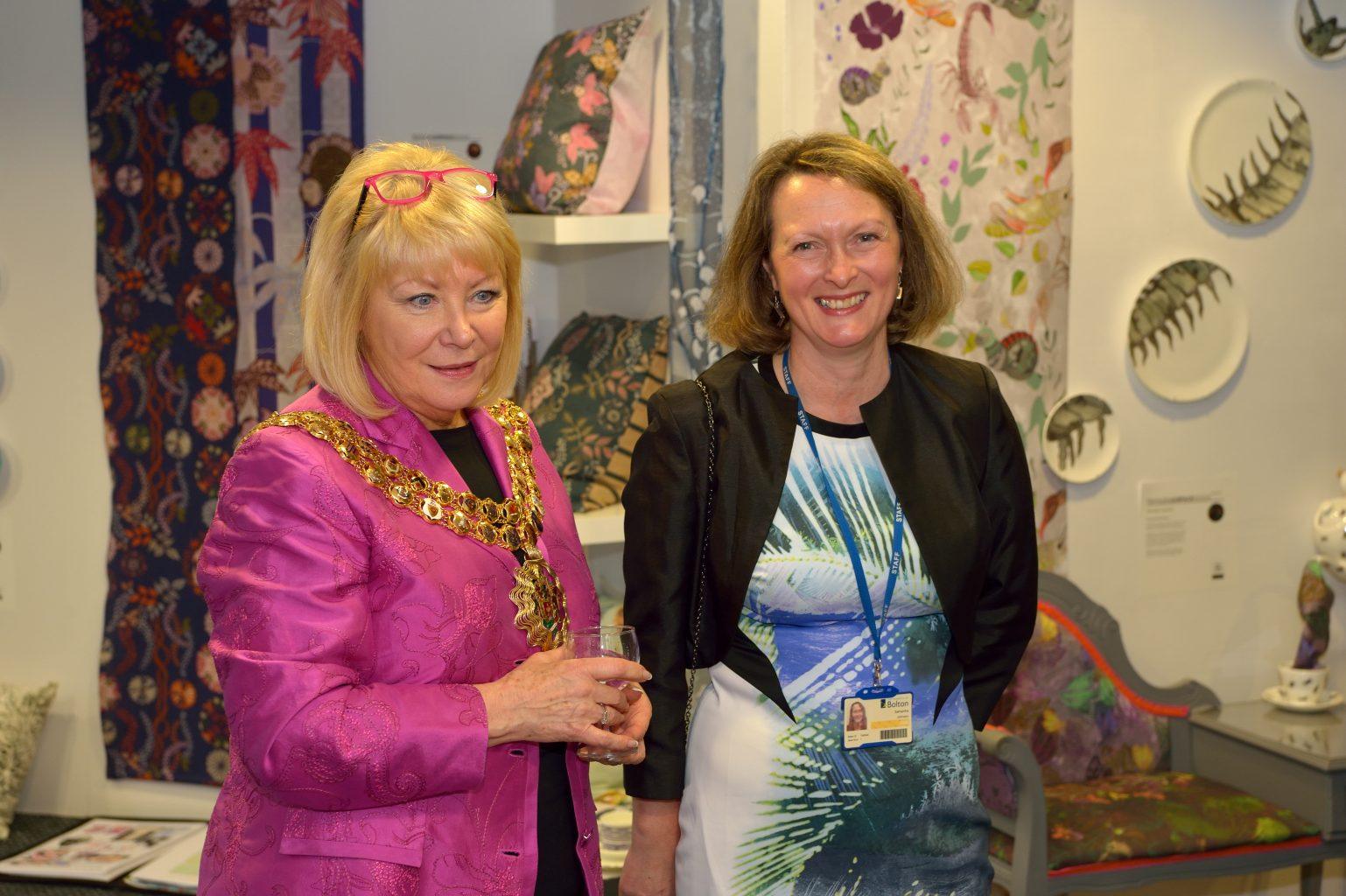 Students and their families celebrated at the annual Creative Show Awards prize-giving at the University of Bolton. The awards, covering a wide range of arts’ disciplines, were handed out by Kondal Reddy Kandadi, Deputy Vice-Chancellor of the university. He said: “You should all be proud of your hard work and it is great to see such talent on display.” The show was opened by Julie Lomax, who was until recently the Director of Development of Liverpool Biennial and is now CEO of a-n, The Artists Information Company. Sam Johnson, Head of the Bolton School of the Arts, paid tribute to the students’ hard work and talent. She said: “The work being presented here is amazing. I am so thankful to the university, for the investment that has been put in to ensure we have the best facilities and equipment.” The Mayor of Bolton, Cllr Hilary Fairclough and her consort, husband Don, attended the show and said they were impressed by the work on display. Students, their families and invited guests also toured the exhibition. The show runs until 22 June (excluding weekends) and features an array of work from courses including Animation and Illustration; Art and Design, Fashion and SFX Foundation; Fine Art; Graphic Design; Photography; Textiles and Surface Design; the Aspire Project (with Bolton College); Applied Creativity; and the Art and Design 14-16 Saturday Club. Earlier in the day, media students screened a selection of their work at The Light Cinema, Market Place, Bolton. Media staff agreed to give a commendation to one student from each year during the show at the cinema. Neil Dougan, Programme Leader for BA (Hons) Media, Writing and Production in the Media Department, said: “This recognises the outstanding support each student gives to other students and staff, which goes beyond what is required of the course and cannot always be marked or assessed within modules.” School Of The Arts: Creative Show Prizes 2019 Foundation Year Art and Design, Fashion and SFX Most engaged student: Shola St John-Forbes and Luciana Evans Student development and progression: Anne Southgate Scholarship and achievement: Laura Gray Applied Creativity (First Year) Best in Show: Portrait by Sally Moss (Fine Art) Commendations: Yelena Overchenko (Photography); Jessica Caroll (Graphic Design); Jennifer Anderton (Animation and Illustration); Iram Malik (Textiles and Surface Design) Creative Writing and English Award Winners Carcanet Poetry Prize: Megan Shepard Other Stories Fiction Prize: Lauren Carroll English Essay prize: Imogen Barton-Wells for her Narrative Representations of Female Desire essay Fine Art The prize winners for the 12-week Neo Studio award are: Fine Art: Alexander Spink, Vicki Jones, Charlotte Robinson Photography: Holly Young Redeye Photography Network Awards Honourable mentions (each receiving a free year of Redeye membership): Meg Salvi, Cami Walsh, Lauren Disley and Carly Jones The recipient of the Redeye student mentorship for 2019, who will receive a package of expert mentoring and career guidance over the next year, a year of free membership, and also feature in the #RedeyeTalent stream: Holly Young Graphic Design Awards The Last Yankee Design Project: Kristian Faulkner-Smith (First Place); Ya’qub Mir and Lauren Disley (Commendation) Brand Up North Project: Ya’qub Mir Home No Home Project: Shelby Smith Bolton Worktown Project: Jessica Carroll Prevent Breast Cancer Charity Award: Ya’qub Mir and Oktawia Andrys Fortalice Project: John Francis Animation and Illustration Neo Artists 12-week Studio Award: Illustrator Nic Jones Animation Explorative Practice Award: Samia Mughal’s animated short ‘Appi (Sister)’ Textiles and Surface Design AVA CAD/CAM Design Software: Jenny McCarthy: Training Prize; Morgan Fay – one-year free subscription Bluecoat Display Centre – Exhibition with known makers: Leonie Smith Manchester Craft and Display Centre: Murron Fraser and Rebecca Ballard Great Northern Events – Showcase at Little Northern Contemporary Craft Fair: Demi Carter Edinburgh Weaver Ltd – cash prize: Morgan Fay Awards for media students at the Creative Show at the Light Cinema 1st year: Tolu Olurebi 2nd Year: Michael Miller 3rd Year: Alastair Millar

The power of the written word

The power of the written word