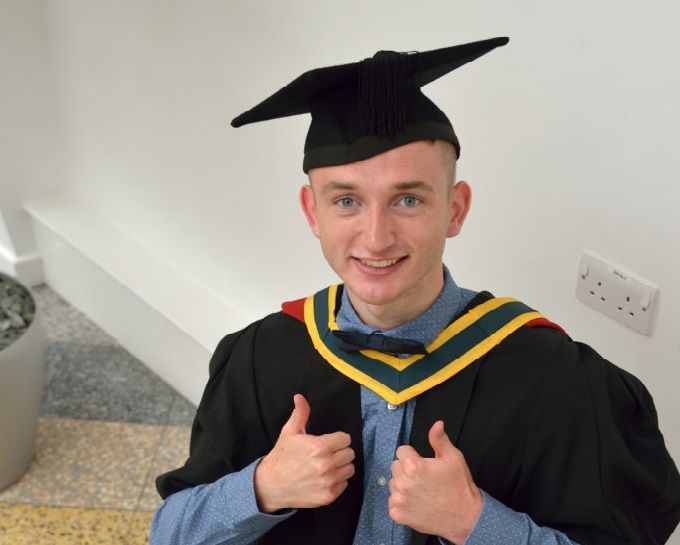 WHEELCHAIR-bound University of Bolton student Matthew Hadfield collected his degree in front of his proud family – and revealed that he has auditioned to become a Butlins Redcoat. The 21-year-old, who has been unable to walk from birth, graduated in Sports Development and Coaching at a ceremony at The Albert Halls on Wednesday July 18. During his three years of study, Matthew, from Rochdale, has lived independently in the University Halls of Residence at Orlando village in specially adapted accommodation which allows wheelchair access, with a wet room. He said: “I wasn’t originally going to go to university, but my college lecturer said I should do this course at the University of Bolton and so I came on an Open Day and had a look around. I was impressed with the access here and felt it was right for me. Actually, when I arrived, I made some suggestions on how to improve access and the university acted on them. I have enjoyed my time here – met some great people from all over the world and made lots of friends.” In his second year, Matthew decided to have a go at a comedy night at the Students’ Union and enjoyed it so much he has become, in his own words, something of a “sit-down, not stand-up comedian”! He said: “I have discovered that I want to entertain people for a living and being at university has helped me very much. I would tell everyone to go to uni – it’s a great experience.” Proud dad Neil said his son had grown in confidence since his college days, but being at university had made a huge difference. Fiona Valentine, the university’s disability services manager, said she was delighted to see Matthew graduate. “He has been a tremendous asset to this university and we are very proud of him indeed.”