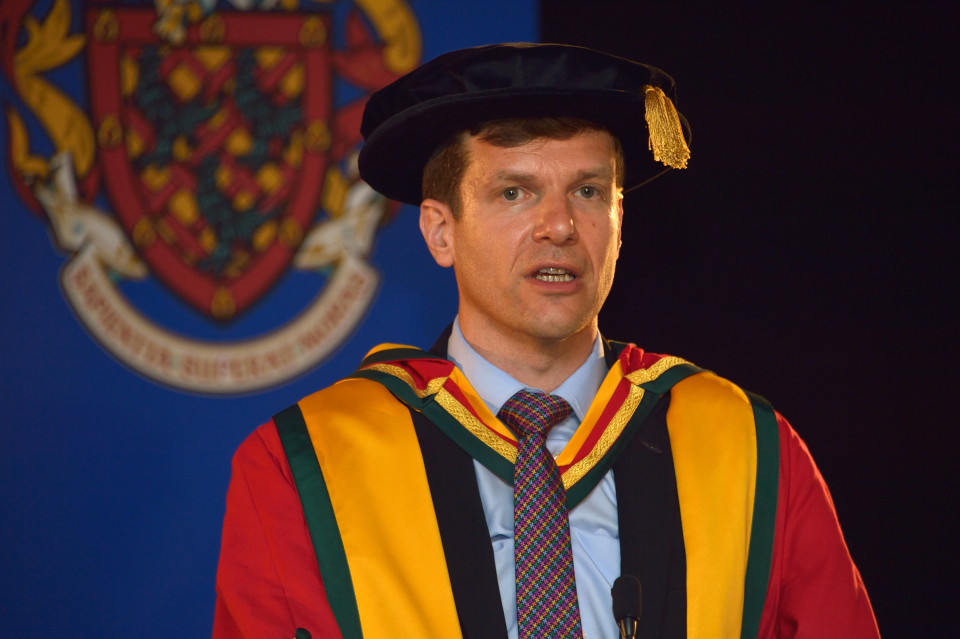 A newly-appointed Assistant Pro Vice Chancellor at the University of Bolton received an honorary doctorate from the University. Dr Greg Walker was awarded a Doctor of Education for his outstanding contribution to Higher Education particularly during the Covid-19 pandemic.

He said: “I am delighted and privileged to receive this honorary doctorate from the University of Bolton. This is a recognition I will treasure and will hold with pride throughout my life.”

Dr Walker received the Honorary Doctorate from the Chancellor of the University of Bolton, the Earl of St Andrews, in a unique Covid-secure ceremony which was filmed for a special movie documenting this year’s innovative ‘Alternative Graduation’.

The University of Bolton is one of the only ones in the UK to have invited graduands from this year and last to be presented with their degrees in person and in their gowns, giving them the chance to have official photographs of their special day.

Now in the 25th year of his working life, his career spanned the spheres of academia, tertiary education, and public policy.

Born in a miner’s hospital in the South Wales Valleys and educated at non-selective state schools, Dr Walker has been devoted to improving opportunities for people at all ages and from all backgrounds.

He studied for an MBA at the world-leading Institute of Education in London. His academic work focuses on both political theory and higher education studies. He has published in, and refereed for, international peer reviewed journals in those areas.

In 2012, he joined the UK governing body of the Open University, the largest university in the British Isles with over 200,000 students.

Dr Walker later headed the national association of colleges organisation in Cardiff as their Deputy and as their acting CEO for five years. During this period, he was seconded for eight months by the (now) National Statistician, Professor Sir Ian Diamond, to serve the Welsh Government by jointly writing and editing with Sir Ian what was published as the highly acclaimed ‘Diamond Review of Higher Education Funding and Student Finance’.

The implementation of this report since 2017 has led to a surge in the uptake of flexible and part-time learning among mature students in Wales, contrasting sharply with the continued drop in such learning opportunities for people in the rest of the UK.

In London, Dr Walker recently and successfully led Universities UK’s work to merge the Higher Education Academy, the Leadership Foundation for HE and the Equality Challenge Unit into what we now know as AdvanceHE.

He was appointed Chief Executive of MillionPlus, the Association for Modern Universities in 2017.

Dr Walker played a prominent role behind the scenes in the Covid 19 Ministerial Taskforce for HE chaired by the Universities Minister until May this year.

As he was awarded his doctorate, he added: “The University is a powerhouse of opportunity and empowerment, an agent of change and social mobility.

“It has a long and distinguished past, but I think it has an even greater future, with the promise of so much more to come.”