“Mission Possible: Why fixing educational inequalities is the key to post-pandemic recovery?”

This is a unique opportunity to hear from three of the world’s leading educational thinkers whose experience stretches across the world – Professsor Pasi Sahlberg, Tony Mackay and Professor David Hopkins. Given the challenges, we are all facing and the impact it has had on various sectors of our communities which might help schools and colleges come back to a better, more equitable and stronger future.

With the Laboratory School at its core, the International Centre would not only provide a setting for research and development, but also for the delivery of signature school improvement programmes and Postgraduate programmes at Masters and Doctoral levels that reflect a distinct educational philosophy. This provision is illustrated in the Figure on the right.

Professor Pasi Sahlberg is a Finnish educator who has worked as a schoolteacher, teacher-educator, researcher, and policy advisor in Finland and has studied education systems and advised education leaders around the world. He has written and spoken widely about teaching and learning in school, teachers' work and school improvement, educational change, international education issues, and the future of schools. His book “Finnish Lessons: What Can the World Learn from Educational Change in Finland” won the 2013 Grawemeyer Award for an idea that has potential to change the world. He is also a recipient of the 2012 Education Award in Finland, the 2014 Robert Owen Award in Scotland, the 2016 Lego Prize and Rockefeller Foundation's Bellagio Resident Fellowship in 2017.

He is a former senior education specialist at the World Bank (in Washington, DC), a lead education expert at the European Training Foundation (in Torino, Italy), a Director General at the Finland’s Ministry of Education (CIMO) and a visiting Professor of Practice at Harvard University.

He is a member of several international organisations, editorial boards, and advisory boards. His most recent book (co-authored with William Doyle) is "Let the Children Play: How more play will save our schools and help children thrive" (Oxford University Press, 2019) and forthcoming books "Finnish Lessons 3.0: What Can the World Learn from Educational Change in Finland” (Teachers College Press, 2021) and "In Teachers We Trust: The Finnish way to world-class schools" (Norton, 2021 with Tim Walker). He is Professor of Education Policy and Deputy Director of the Gonski Institute at the University of New South Wales in Sydney, Australia.

Professor George E Holmes DL is the President & Vice Chancellor; Member of the Governing Body at the University of Bolton.

He also serves as a Member of the Resources Committee and the Nominations Committee.

When appointed to the post of Vice Chancellor and Chief Executive of the University in 2005, Professor Holmes became the youngest University head in the UK. He has been at the University now for over 12 years. He holds a Doctorate in the field of Education, a Masters in Business Administration and a BSc in Economics. Professor Holmes is also a Fellow of the Institute of Directors. He previously edited two International Journals for almost ten years, specialising in Quality Assurance in Education.

In 2002 the then Secretary of State appointed him to Education and Skills as an advisor to the Department, becoming, along with Sir Ron Cooke, one of only two sector representatives for the Department’s HE Policy Delivery Steering Group, which was assisting in the preparation of the HE White Paper. Professor Holmes was, for six years until 2014, on the Board of the Octagon Theatre, Bolton, and was formerly a Board member of the Bolton Lads and Girls Club. He was previously a Governor of Bolton School, the ESSA Academy Trust and Bury College. He is a founding Trustee of the Bolton University Technical College, and a Governor at Bolton College.

Prior to joining the University, Professor Holmes was Principal of Doncaster College where he also established the Doncaster Education City Project, of which he became Chief Executive. In this post, he secured the largest capital grant in the history of the FE sector at the time and had responsibility for building a new £75m College on the Waterfront. At Doncaster, he was a Governor of both the College and Hayfield School.

Professor Holmes was previously Deputy Vice Chancellor at the University of North London (now the London Metropolitan University). In 1996 he played a central role, within the Vice Chancellor’s Office, in the founding of the Lincoln University Campus, opened by HM The Queen.

Latterly in 2015, Professor Holmes was appointed by Her Majesty’s Lord Lieutenant of the County of Greater Manchester as one of his Deputy Lieutenants. He has recently joined the Board of Regents College.

John Baumber is currently Head of the International Centre and Director of Education for Kunskapsskolan in the United Kingdom. John has over 40 years of experience in school leadership including 23 years as headteacher both in UK and Sweden. He continues to work globally supporting school leadership and the development of personalised education in countries from the US to India and South Africa to Sweden.

John is passionate about enabling all young people to become self-regulated learners and shape their world, but also about schools seeing themselves as part of the wider community. John has led a range of national and local projects such as regeneration bids, arts projects, and work-based learning programmes.

Kendall’s academic career is shaped by a range of global learning and teaching experiences linked to a progressive program of innovative qualitative research. Having taught at primary, secondary and tertiary levels in educational settings in Australia, Japan and the UK, his experience in education has been equally shared between the University sector and the school system. With a discipline background in sport pedagogy and teacher education, which hold at their core a commitment to developing effective relationships of one type or another.

His research interests include the relationships educators have with the idea of leadership, the practice of leadership in educational settings, and use of instructional pedagogies to develop students’ holistically.

Please see below the programme of the event.

09:30am Housekeeping/Moderated and Welcome by John Baumber

09:35 am Introduction to the Vice Chancellor and other Speakers: Professor David Hopkins

10:05am Professor Pasi Sahlberg: A discussion about what we can learn from other international settings

10:45am Response from Professor David Hopkins

10:55am Q&A An opportunity for the cohort to ask the panel questions (15-20 mins) moderated by John Baumber and Kendall Jarrett

11:10am The work of the International Centre and future opportunities: The ICEE Team 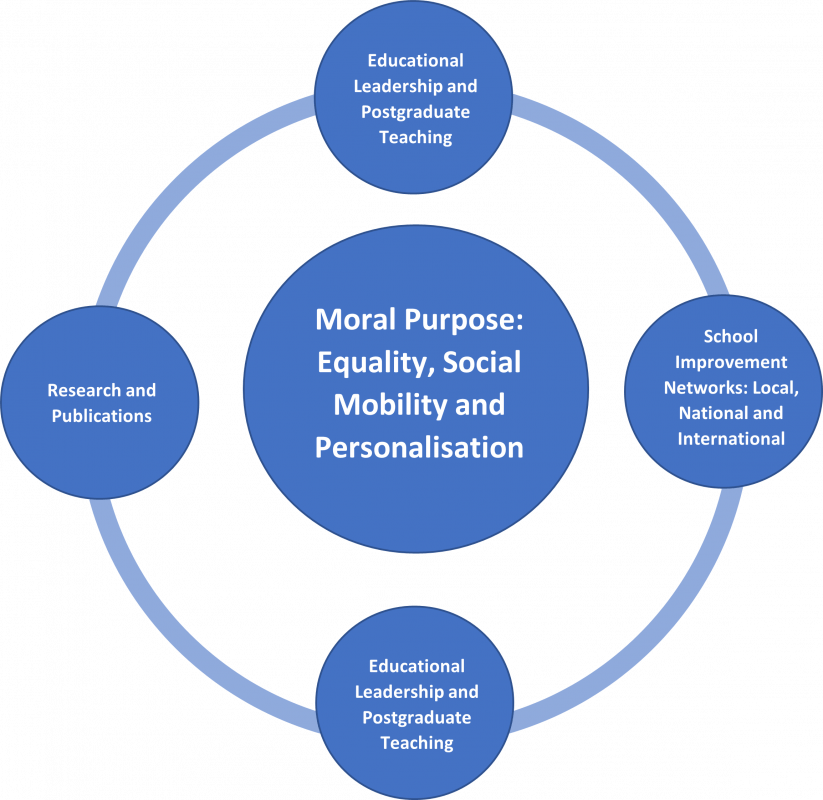