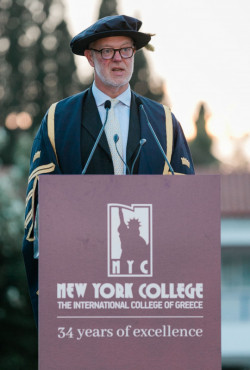 University of Bolton Chancellor Earl of St Andrews presented an honorary doctorate to the Vice President of the World Jewish Congress at a graduation ceremony in Greece.

David Saltiel was awarded the degree of Doctor of Philosophy for his outstanding contribution to business and community at the University’s partner educational provider, New York College, Athens.

He has played an indispensable role in advancing the cause of Greek Jews and helping to tackle racism and anti-Semitism.

For more than two decades since he was first elected Chairman of the Jewish Community of Thessaloniki, Mr Saltiel has been a champion and fighter for a strong Jewish community.

Among his many achievements, he successfully fought to include Greek survivors of the Holocaust in the compensation claim at the 2002 Conference on Jewish Material Claims Against Germany.

In Thessaloniki, he organised the burial of the bones of Colonel Mordechai Frizis, who was the first senior officer to be killed in the Greek-Italian war – and a symbol of the hundreds of Greek Jews who fell for their homeland. 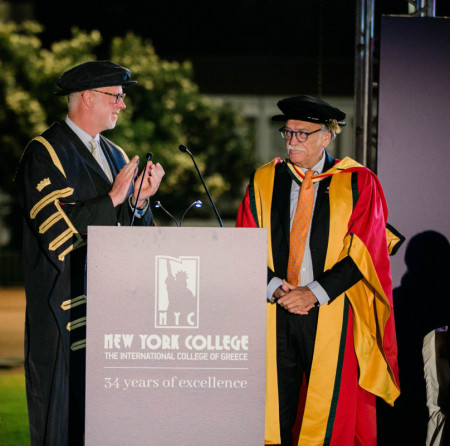 Mr Satiel’s work has been internationally recognised. He was honoured with the title of Cavaliere by the President of the Italian Republic in 2008, the title of Knight of the Legion of Honour by the French Republic in 2011, the Cross of Merit of the Order of the Federal Republic of Germany in 2017 and the Cross of the Order of Isabella the Catholic by His Majesty the King of Spain in 2018.

In 2019 he was honoured with the title of Ufficiale dell'Ordine della Stella d'Italia - Officer of the Star of Italy – an honour bestowed upon prominent personalities for their contribution to the development of business and cultural relations between Italy and other countries.

In 2020, Mr Saltiel was awarded the medal of the Grand Commander of the Order of the Phoenix, by H E the President of the Hellenic Republic, Mr Prokopios V Pavlopoulos.

Around 200 University of Bolton students studying in Athens have graduated this year from New York College.

The Earl of St Andrews was the keynote speaker, addressing the congregation and presenting awards to students.