The Consul-General of Portugal in Manchester addressed guests at a special conference at the University of Bolton to promote the United Nations Ocean Conference (UNOC) which takes place this summer.

Duarte Bue Alves gave a stark warning – that the world is not doing enough to protect the oceans and needs to do more. 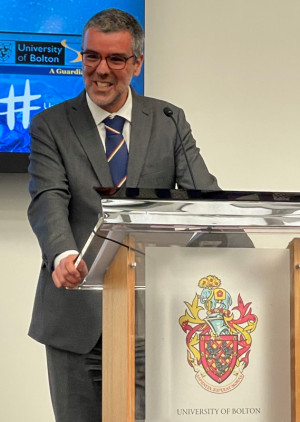 He said: “We need to roll up our sleeves. We need to build forward better, bluer, and greener with nature-based solutions and science solutions, which is where universities like the University of Bolton play an important role.”

UNOC, which runs from June 27-July 1, is co-hosted by Portugal and Kenya, and comes at a critical moment as the world is strengthening its efforts to protect the state of its oceans.

Two student winners of a competition to write essays about the importance of protecting the oceans, Megan Edwards, and Jana Hlavonkova, were presented with their prizes at the conference.

It was held in the Social Learning Zone on the Bolton campus, in front of the Mayor of Bolton Cllr Linda Thomas and former Bolton MP Dr Brian Iddon. Pupils from Harper Green School, Farnworth, also attended to listen to the speeches.

Reena Bhogal-Welsh, Director without Portfolio at the University, who has responsibility for creating an environmental sustainability strategy, told guests she had been impressed by the students’ competition entries.

She said: “Reading through the entries from the students was a privilege.

“I know the judging panel were inspired by the students’ views and passion for the ocean, not just for its beauty, but also its power to heal the mind and feed the soul.

“As one student said, ‘the ocean reminds me that there is more than what is right in front of me. A hidden depth below, an evolution. Saving the ocean is saving our connections to the past, present and future’.”

Megan and Jana will receive a trip to the UN Oceans Conference in the summer where they will present their thoughts to delegates at the conference’s Youth Forum.

Dr Iddon said: “I am delighted to be here today to announce the winners of the competition.”

Megan was not present to receive her award, which was accepted by Professor Jerome Carson, the University’s Professor of Psychology. 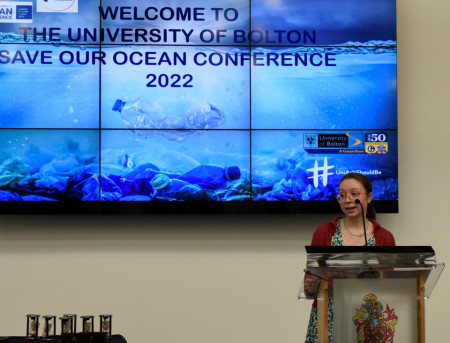 After Jana received her award, she presented her essay to the audience, stressing the importance of acting before it is too late.

Dr Maurizio Bragagni, a Visiting Professor for the Institute of Management and Leadership at the University Bolton and Honorary Consul of San Marino to the UK, was also an honoured guest.

The conference ended with closing remarks from the University’s Assistant Vice-Chancellor (Transformation) Caroline Cowburn, who thanked guests for attending the “landmark event”, adding: “It has been amazing to hear from everyone today.”

UNOC will produce a political declaration and bring together Governments, the United Nations system, intergovernmental organisations, as well as representatives from international finance, academic, scientific, and philanthropic communities.

The Youth Forum aims to mobilise young people and help to share knowledge about the ocean among younger generations.