The University of Bolton Group has donated 50 bikes to Ukrainian refugees who have fled their war-torn homeland for sanctuary in the town.

Professor George E Holmes DL, President and Vice Chancellor of the University of Bolton, handed the bicycles over at a special presentation on campus. 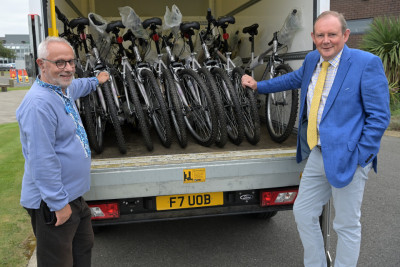 The bikes, 45 women’s and five men’s, were gratefully received by Yaroslaw Tymchyshyn, chairman of the Bolton branch of the Association of Ukrainians in Great Britain.

He said: “It’s unbelievable – it means that the guests are not reliant upon the hosts, so they don’t then have to feel like they have to ask their hosts to take them somewhere. It gives them freedom. I just think it is magic.”

The bikes were some of 1,000 bought by the University to loan for free to students so they did not have to travel on public transport during the pandemic.

Professor Holmes said: "The University is committed to working with groups from all over the world and the Ukrainian community who have come here as guests are obviously massively affected.

“From the University's point of view, we see ourselves as a civic citizens able to contribute to society in any way we possibly can.

"We bought 1,000 bikes for our students during the Covid pandemic and we had some left and from my point of view, it is a way of helping the community to live here, enjoy their time here and have a good memory of their time in Bolton when they go home and have a memory of this University.

"This is an example of social cohesion and there is nothing better than to bring other people into this community from all over the world, particularly from Ukraine at this time where we can help and support those people."

One of the Ukrainian refugees who received a bike, Mariia Bielieskova, aged 13, will use it to travel to school. 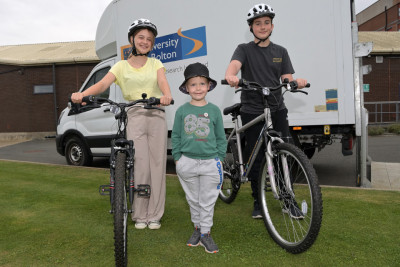 She said: "I go to school which is not very near to our house so it will be really useful for me and we are very thankful."

The 50 donated cycles are adult sizes. However, two children who attended the presentation were not big enough for the bikes. So Professor Holmes arranged for two bikes, plus stabilisers and helmets, to be bought for them so they were not left out.

Earlier this month the Bolton branch of the Association of Ukrainians in Great Britain was given money from proceeds raised at a charity fundraising dinner at Bolton College, part of the University of Bolton Group.

Yaroslaw said the money donated from the College vent will be put to good use to help the community in need.