Bolton’s Jenny Ryan, ‘The Vixen’ from the TV quiz show The Chase, said she was “overwhelmed” to receive an honorary doctorate from the University of Bolton. 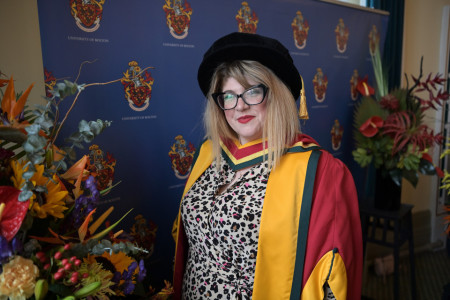 Jenny, a prolific quiz contestant who has appeared in numerous TV shows, including Celebrity MasterChef and the final of X Factor Celebrity in 2019, was awarded the degree of Doctor of Arts for her outstanding contribution to television and entertainment.

The former Thornleigh Salesian College student told students and their families at the ceremony in Bolton town hall: “Congratulations graduates of 2022. Your hard work has paid off, enjoy your special day.

“To paraphrase a very wise man named Bradley: for you, the chase is just beginning!”

Bolton Wanderers season ticket holder Jenny studied Law at the University of Leeds, where she helped the Leeds team reach the semi-finals of University Challenge.

She later worked as a writer and researcher on the quiz and game shows including The Weakest Link and QI.

She said: “I’m a Boltonian born and bred. The thing about Bolton is that if you call Bolton home once, it will always be home. Whether you live here or not, whether you have family here or not, you are all Boltonians.

“We will watch with pride as you go on and achieve. And don’t forget you can always pop back for a brew! 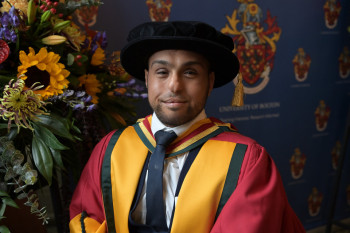 Bolton Paralympic Gold medallist Ayaz Bhuta MBE was awarded the degree of Doctor of Science for his outstanding contribution to sport and the community.

Ayaz, who is the founder of AB10 Revolution, a community interest company that delivers workshops on disability in sport, and inclusive activities to schools, grew up in Bolton and attended Mount St Joseph's School, followed by Thornleigh Salesian Sixth Form College and the University of Bolton.

Not only did Ayaz secure Gold at the Tokyo 2020 Paralympics, but he is also a double European champion and European bronze medal winner.

He was awarded an MBE for his achievements and continues to inspire others with his motivational speeches across the UK.

He said: “As a Bolton University graduate it is a great honour and privilege to be part of this joyous occasion with you all. In life’s journey, it is important to remain humble, resilient and true to yourself. I hope you all have an amazing day and I wish you all the best for the future.”

Both received their honorary awards from Professor George E Holmes DL, President and Vice Chancellor of the University of Bolton. 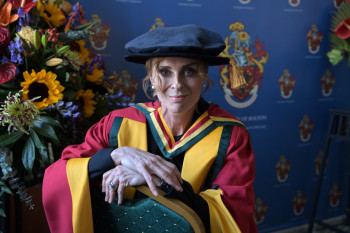 Award-winning singer, songwriter and actress Lisa received the degree of Doctor of Arts for her outstanding contribution to music and entertainment.

Lisa was born in Manchester and grew up in Rochdale and started singing at the age of four.

She went on to become one of the most successful female recording artists of her generation, selling more than 20 million records worldwide. She also forged a successful acting career, with appearances in films like Northern Soul.

One of her most loved songs, ‘All Around the World’, reached number one in multiple countries.

She said: “This is a very lovely surprise and a massive honour. I would like to congratulate everyone who has got a degree today, it’s fantastic and I wish everyone good luck.”

Clare Pollard, poet, playwright and novelist from Bolton, was awarded the degree of Doctor of Letters for her outstanding contribution to the literature by the University of Bolton.

Her poetry has been published in five collections and a pamphlet. Her novel Delphi will be published soon.

Clare has been a judge for various awards and accolades, including the PBS Next Generation list, the Popescu European Poetry Translation Prize, and the Manchester International Poetry Prize. Clare is the current editor of Modern Poetry in Translation and poetry editor for The Idler.

The former Turton High School pupil said: “This is my home town and I wrote my first book, a book of poetry, here. I have so many great memories of Bolton.

“Good memories give us a kind of protection as we go through life. We know that we are loved and capable of achieving what we hoped for.

“I want you to remember the kindness you showed each other and your bravery and your strength and the friends you made and the things you learnt you were capable of and that you got through.”

Julie has been instrumental in enhancing our most cherished cultural spaces – from the refurbishment of the Central Museum to developing the new Little Lever Library. Her service to public libraries has been recognised with an MBE and OBE.

Julie, who is from Bolton, said: “I would like to pay tribute to those of you receiving your qualifications today.

“To those of you who have achieved this, part-time or full-time, during a worldwide pandemic and all that entailed, I would like to say well done and congratulations. You should be very proud.” 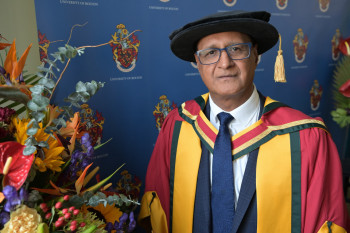 Former Bolton councillor Ansar Hussain, who is a solicitor with 38 years of experience in legal practice, received the degree of Doctor of Laws for his outstanding contribution to law.

Ansar became a newly qualified solicitor in 1983 at a time when there were few lawyers from ethnic minority backgrounds. He went on to build one of the largest legal firms in the North West. Between 2000 and 2008, Ansar served his local community and became Bolton’s first councillor of Asian origin.

His current practice, ADK Law Solicitors, has created employment for hundreds of people.

He said: “I am humbled and extremely pleased to be receiving this award, it is a huge privilege. I would like to thank Bolton University for endowing me with this great honour in recognition of my services to the community and my services to the legal profession.”

Jayesh Ranjan - Doctor of the University for his outstanding contribution to the development of collaborative relationships between India and Manchester (particularly in the technology sector). Jayesh works for the provincial government of Telangana as the Principal Secretary for the departments of IT and industry. Jayesh has worked towards the goal of digital empowerment of all citizens. In 2018, he was awarded the Royal Order of the Polar Star by His Majesty the King of Sweden for his role in promoting bilateral relations and trade and investment.

He said: “For the past many years I have tried to forge more partnerships between the province of Hyderabad and the UK and that is why I am getting this fabulous recognition by the University of Bolton and why I have received this honorary doctorate today.”