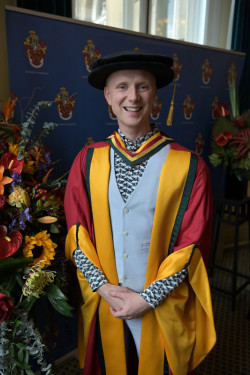 Popular broadcaster Owain Wyn Evans brought the house down with an incredible drum solo as he received an honorary doctorate from the University of Bolton.

Owain, a familiar face on BBC Breakfast and The One Show and as a weather presenter across BBC regional shows including North West Tonight, took to the stage at the Albert Halls in Bolton town hall to show off his skills … while wearing a University graduation gown.

He told the audience: “I’ve never played the drums before in something like this!”

Professor George E Holmes DL, President and Vice Chancellor of the University of Bolton, pledged to donate money to the appeal for Ukraine for every drum stroke, up to £1,000.

Owain was earlier awarded the degree of Doctor of Arts for his outstanding contribution to broadcasting.

He said: “It’s an absolute honour to receive this honorary doctorate. For me this has extra weight because I didn’t go to university when I was younger, and I always thought that one day I would love to have a degree, but it just didn’t work out that way for me.

“So, to receive this is something I could never have imagined in a thousand years. One thing I will say about this town and this university is that it reminds me of home.

“Congratulations to everyone who is graduating today.”

Owain was raised in Ammanford in Carmarthenshire, Wales, and at the age of 18 became the presenter of the Welsh language children’s news programme, Ffeil.

He has dedicated himself to charitable causes and notably completed a 24-hour drumming challenge for BBC Children in Need, raising more than £2.5 million.

He is also a proud patron of the LGBT Foundation and a passionate advocate for equality. 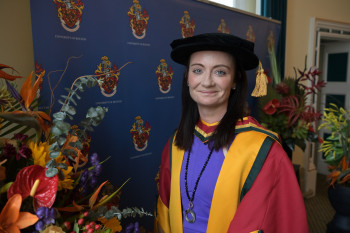 Dr Helen Wall, who led the rollout of the COVID-19 vaccination programme in Bolton during the pandemic, received the degree of Doctor of Health Care for her outstanding contribution to public health.

Dr Wall, who was born and raised in Bolton, said: “It’s a privilege to be standing here today to receive an honorary doctorate from the University of Bolton.”

In addition to her role as a GP Senior Partner, where she sees patients on a weekly basis, Dr Wall is Bolton CCG’s Clinical Director of Commissioning.

Since the COVID-19 outbreak began, Dr Wall has shown exemplary leadership as the Senior Responsible Officer for implementing Bolton’s response to the pandemic.

She said: “None of what has led me here today could have been done without many, many others.” 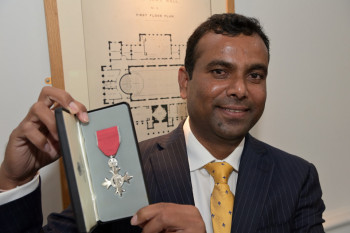 Dr Kondal Reddy Kandadi, former Deputy Vice Chancellor of the University of Bolton, was presented with an honorary MBE at the Friday ceremony.

Professor George E Holmes DL, Vice Chancellor of the University, acting in his capacity as a Deputy Lieutenant of Greater Manchester, was awarded the special honour, a first for a British university.

Dr Kandadi has remained a citizen of India throughout his time in Bolton and last June decided to return to lead the development of a major new education project in his home town.

He has continued his connections with the institution by offering Bolton higher education and research programmes as part of his exciting new project.

Dr Kandadi, who studied as a post-graduate student at the University of Bolton, gaining his PhD Degree, rose through the ranks over the last 15 years to become Deputy Vice-Chancellor.

After he was presented with the MBE, he said: “I have had the privilege of working with so many incredible people over the last 20 years. I would like to pay tribute to every one of them for their support and trust.”

An Accrington-born professor, researcher and writer in the field of education told of his “delight” at receiving his honorary doctorate. 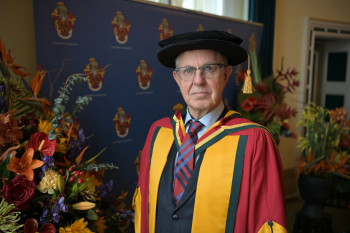 Professor Andy Hargreaves received the degree of Doctor of Education for his outstanding contribution to Global Higher Education.

Professor Hargreaves said: “It is hard for me to express just how delighted I am to receive this honorary doctorate from the University of Bolton, which is the closest town geographically and, in many ways, culturally, to the town I grew up in Accrington.”

Lifelong Burnley FC supporter Professor Hargreaves has lectured in several universities across the UK and Canada and is presently the Director of Chenine (Change, Engagement and Innovation in Education) at the University of Ottawa.

He has published more than 30 books, has eight Outstanding Writing awards and has enjoyed a long and distinguished career in educational research, leadership and change.

Former Bolton School student Professor David Hargreaves was also awarded an honorary degree, in his absence, having contracted Covid-19 earlier this week. Both professors, who coincidentally share the same surname, are friends and colleagues.

Professor David Hargreaves received the degree of Doctor of Education for his outstanding contribution to Global Higher Education.

In a long and distinguished career, Professor Hargreaves has published countless books, articles and pamphlets covering social psychology and its relationship to education. After Bolton School, he attended Christ’s College Cambridge.

His award was accepted in his absence by David Hopkins, Professor of Educational Leadership at the University of Bolton and Emeritus at the Institute of Education, University College London.

Professor Hopkins said: “David sends his apologies for not being here today. He was so looking forward to coming back to his home town of Bolton and to receive this degree alongside his esteemed colleague Professor Andy Hargreaves.”

Bill Webster, Vice President of the University of Bolton and Principal of Bolton College conferred the degrees.

Graduands from the School of Nursing and Midwifery and the School of Clinical and Biomedical Sciences were presented with their degrees throughout the day. 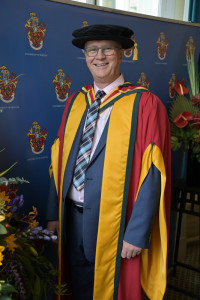 Dr Melvin Bradley - degree of Doctor of Health Care for his outstanding contribution to Mental Health Services. Dr Bradley is the founder of MhIST’s sister social enterprise Workplace Mental Health Limited, which helps businesses across the UK to support their workforce with mental health challenges and his dedication to community mental health has been there for all to see.

His long and varied career started with a BSc joint honours in Chemistry and Business Administration from Kingston polytechnic. Subsequently, he overcame a serious traffic accident in the 1990s, and in his time away from work, qualified as an NHS counsellor. 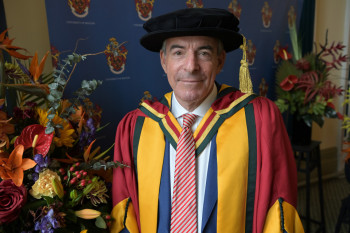 Stephen Conn - degree of Doctor of Business Administration for his outstanding contribution to the University. Mr Conn works with the University of Bolton as an Independent Member and Member of the Resources and Nominations Committee. He qualified as a Chartered Accountant in 1970 and was made a Fellow of the Institute of Chartered Accountants in England and Wales in 1979. In a long and varied career, he worked for Deloitte in Australia for two years before returning to the UK. He later set up his own company.

Akeim Mundell – was made an Alumni Fellow of the University. A former student at the University of Bolton, Akeim is a campaigner, mentor and community ambassador who has dedicated his life to ending gun and knife crime. Akeim has been a rock of support in his community of Moss Side, Manchester. In the 2017 New Year’s Honours list, he was awarded a British Empire Medal by the Queen in recognition of his dedication to his community, particularly young people. He was an integral part of the award-winning Reclaim project, and over the years, has organised events such as Manchester’s Got Talent, and coach trips to help broaden horizons and bring the community together. 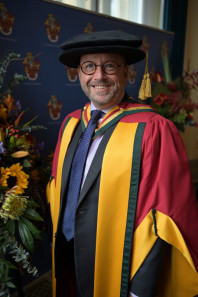 Darryn Allcorn - Doctor of Health Care for his outstanding contribution to nursing. Darryn is Chief Nursing Officer for the Devon Clinical Commissioning Group and Devon STP. For more than a quarter of a century, he has made an outstanding contribution to nursing – both as a clinical leader and in working with patients on the ground. Thanks to his efforts, more people have been able to access the quality care they deserve. In particular, he has advocated new models of care (such as care closer to home), and other workforce innovations, like the creation of new roles such as Nursing Associates. At the heart of his work has been a commitment to putting patients first and improving healthcare governance, planning and professional practice for the benefit of us all.

Throughout his distinguished career, Dr Fletcher, who is the National Medical Examiner for England and Wales, has transformed the medical examiner role to deliver the highest standards of treatment for the deceased and the best possible service for bereaved families. Dr Fletcher is a true pioneer and he maintains his clinical practice as a Consultant in Emergency Medicine and General Medicine at Sheffield Teaching Hospitals. Previously, Dr Fletcher was the Lead Medical Examiner in Sheffield, and was instrumental in delivering Department of Health reforms of death certification. He has worked to ensure that bereaved people have the opportunity to raise any concerns they have about the care and treatment provided to the deceased person.