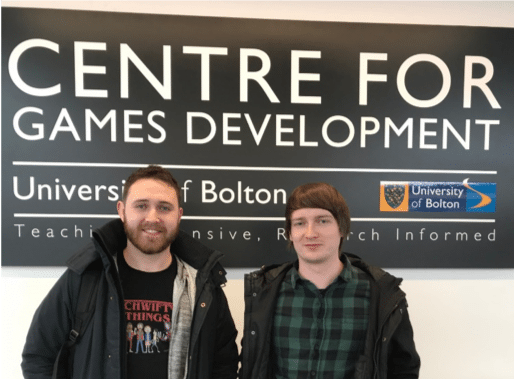 University of Bolton graduates Steven Brown and Sean Burrows returned to the university on Monday 5 February to lead a guest lecture in the new Centre for Games Development.

Offering advice and support to current Games students, the lecture detailed the routes taken by both Steven and Sean to kick-start their careers in the gaming world, offering insight into their experiences in industry roles. Both Steven and Sean are currently employed by Lucid Games, an independent games studio based in Liverpool, which focuses on developing cutting edge games and apps. Lucid Games employs several graduates from all three of the university’s undergraduate Games programmes and is currently seeking new graduate hires.

The guest lecture formed part of the second year Games Employability module, a core module in all three undergraduate Games courses. The module aims to ensure students understand how to showcase their skills for seamless entry into the world of work, supporting the university’s promise to help students acquire the skills, knowledge and abilities to gain suitable employment.

BA (Hons) Games Art student Arlen Barrett, who attended the lecture commented: "Steven and Sean really shed some light on the hiring process and a career in the gaming industry. They gave us some great pointers on how to present ourselves in an interview setting."

Fellow BA (Hons) Games Art student Fin De Toms-Scott added: “Both Steven and Sean were very informative speakers, who helped ease my worries about going into the gaming industry. Their lecture opened my mind about areas I didn’t know existed and the mention that Lucid Games take on a number of University of Bolton students also relaxed my worries a bit. Overall, it was a very enjoyable lecture.”

Following their talk, Steven commented: “Both Sean and I very much enjoyed passing on our experiences, offering advice on getting into the industry and being able to respond directly to the insightful questions from the students. We were also really impressed by the fantastic new facilities and games studios at the university.”