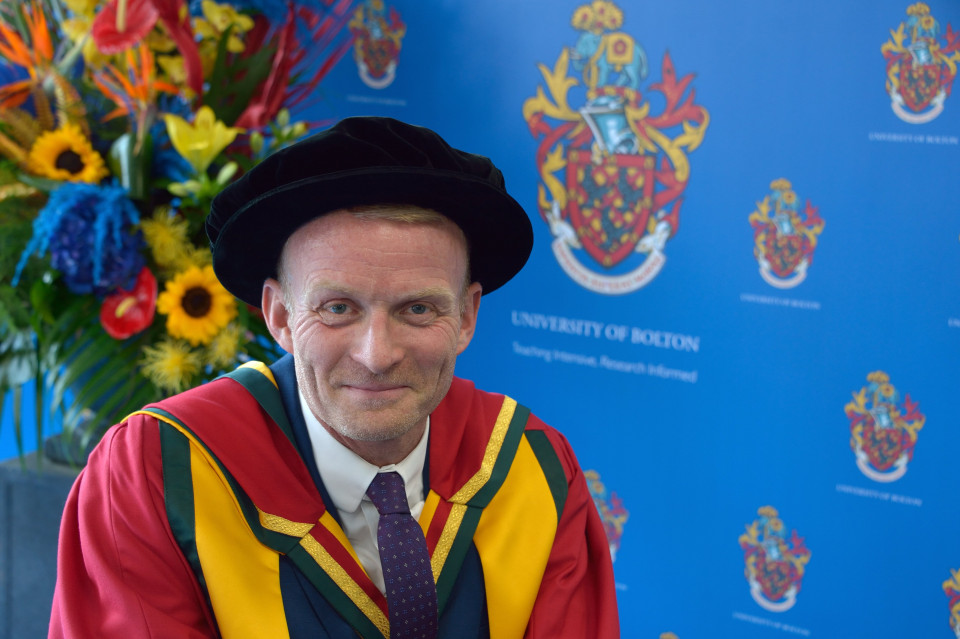 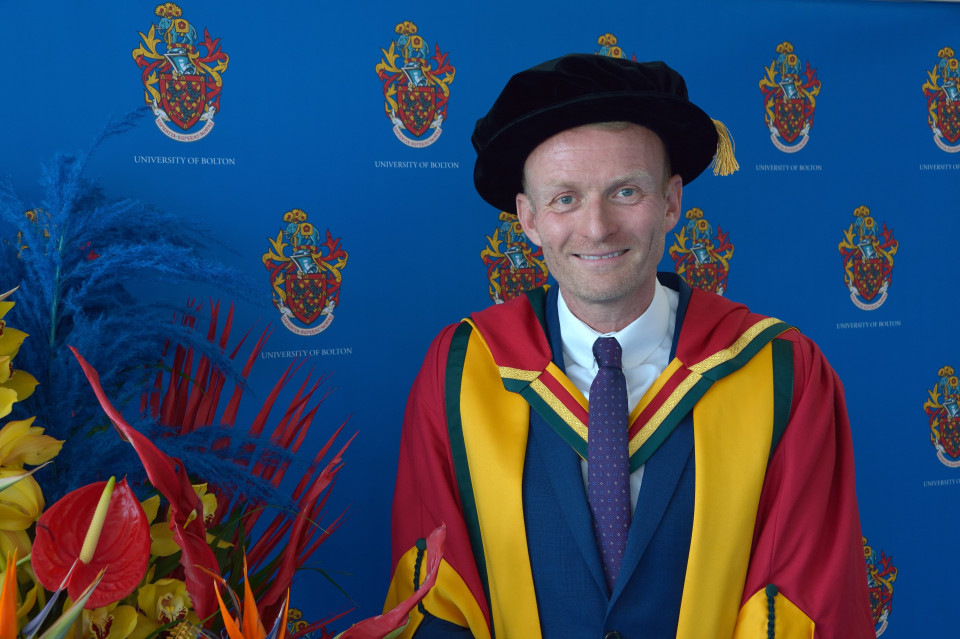 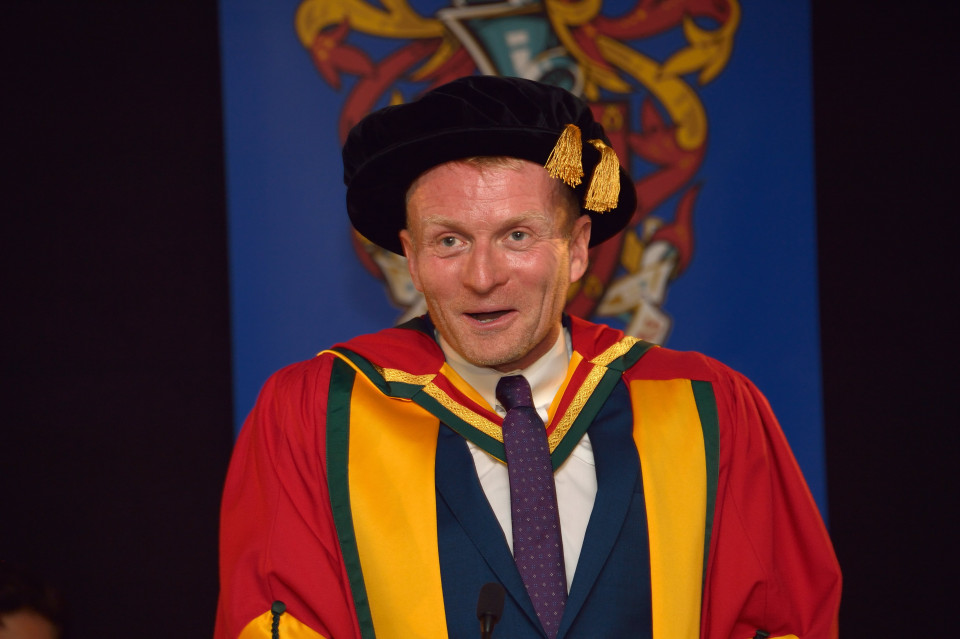 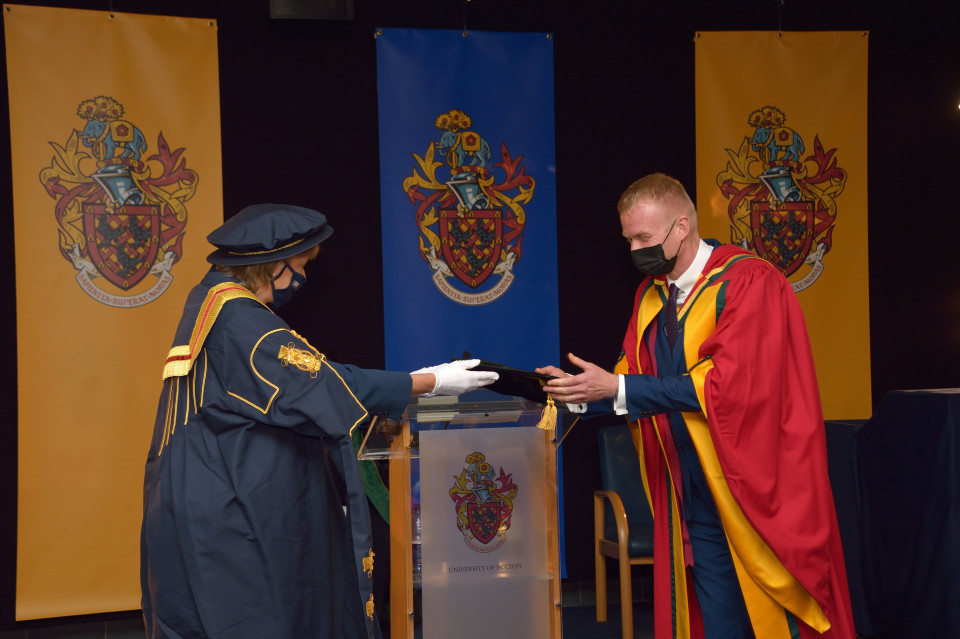 Popular author Matt Cain said it was a “real thrill” to receive an honorary doctorate from the University of Bolton.

Mr Cain was awarded a Doctor of the University for his outstanding contribution to Literature and the Community.

He said: “I am proud to be from Bolton. I love the town – it inspires me. This doctorate has given me another shot of inspiration.”

Mr Cain received the Honorary Doctorate in a unique Covid-secure ceremony which was filmed for a special movie documenting this year’s innovative ‘Alternative Graduation’.

Mr Cain was born in Bury and brought up in Bolton and told how he did not enjoy living here as a teenager because of the way he was treated for being gay.

He said he actively moved from the town to get away from homophobia but added that he had seen a huge change in how gay people were accepted in Bolton since his experiences as a teenager.

He said: “The town has become much more accepting of LGBT+ people. I have seen that as I have returned here over the years. I now love Bolton!”

Mr Cain was educated at state schools and then Cambridge University.

He spent 10 years making arts and entertainment programmes for ITV, including documentaries about Freddie Mercury, Mamma Mia! and The Da Vinci Code, and profiles of Ian McKellen, Darcey Bussell and Will Young for The South Bank Show.

Between 2010 and 2013, he worked in front of the camera as Channel 4 News’ first-ever Culture Editor.

Between 2016 and 2018 he worked as Editor-in-Chief of Attitude, the UK's biggest-selling magazine for gay men.

As a freelance journalist, he has written for all the UK’s major newspapers and appeared on Sky News, BBC Breakfast and Good Morning Britain. He has been nominated for Stonewall's Writer of the Year award and in 2017 was voted winner of Diversity in Media's Journalist of the Year award.

In 2017 Mr Cain crowdfunded his third novel, ‘The Madonna of Bolton’, after receiving more than 30 rejections from publishers, reportedly due to its gay protagonist and theme.

The title reached its funding target in seven days and the project was backed by celebrities including David Walliams, Mark Gatiss, Lisa Jewell and Gok Wan.

Mr Cain is an ambassador for Manchester Pride and the Albert Kennedy Trust, the UK's national youth LGBT+ homelessness charity. He is also a patron of LGBT History Month.

His latest novel, ‘The Secret Life of Albert Entwistle’, was published in May.