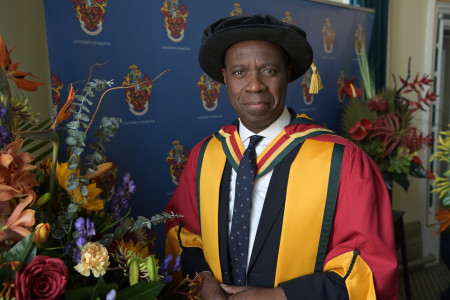 Bolton-born Clive, who spent his childhood living opposite Burnden Park, the former home of Bolton Wanderers, was presented with the degree of Doctor of Social Science for his outstanding contribution to broadcasting, television and society.

Clive told students and their families: “I am honoured and humbled to be here with you today.

“For those of you in recent months who have been wondering what the hell the bloke off Mastermind has been doing hanging around the war zone that is Ukraine, well actually I did have a life before Mastermind!”

It was the second day of a week of graduation ceremonies in Bolton’s Albert Halls in the magnificent town hall.

Clive said: “What an honour this is. It is precisely 40 years ago this summer that I left Bolton in 1982 to go to university.

“I will never forget the sense of trepidation and fear but the excitement I had at the beginning of that phase of my life.

“It is wonderful to be here to see all the graduates, all those people getting their degrees and embarking on the next phase of their life.”

He added: “I grew up on Manchester Road, just down the road opposite Burnden Park as it was then. I had big dreams to become a journalist and I’m lucky I have had breaks through the years, and I have managed to fulfil those dreams.

“Thank you to Bolton, a wonderful, wonderful town and a place very dear to my heart. Thank you to the University of Bolton, to everyone. It’s great to be here."

In 2021, Clive took over as host of Mastermind, but he continues to travel the world as a reporter, most recently from Kyiv during his live broadcasts on the Russia-Ukraine conflict.

Clive studied Law at the University of Sussex and has served as the BBC's Asia, Africa, Washington and Europe Correspondent. 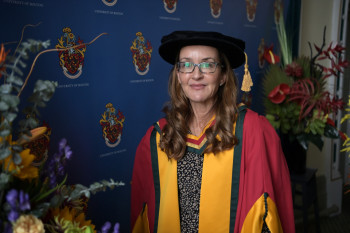 Also honoured on Wednesday 13 July, were Sharon Brittan, chairman of Bolton Wanderers, Michael James, a director and board member of the football club and Dr Helen Lowey, Bolton’s Director of Public Health.

Sharon was awarded the degree of Doctor of the University for her outstanding contribution to sport and community.

In 2019, she fulfilled a dream she had harboured from the age of 15 when she became the owner of a professional football club alongside her consortium, Football Ventures.

​​At the time, Bolton Wanderers had endured almost a decade of decline and were on the brink of extinction.

She has worked tirelessly to ensure that Wanderers supporters, and the people and businesses of the town, have been brought back into the Bolton Family.

Sharon said she was honoured to receive the award and was very emotional about how welcome she had been made to feel since her arrival in Bolton. 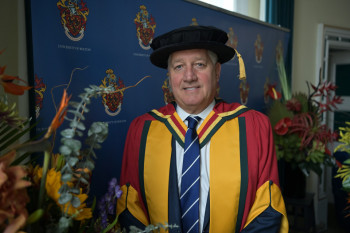 Bolton-born Michael James, a director and board member of his beloved Bolton Wanderers Football Club, was awarded the degree of Doctor of the University for his outstanding contribution to sport and community.

Michael is a founding investor in Football Ventures Whites Ltd, which acquired the club in 2019.

He was born in Westhoughton, left school at 16, worked as an apprentice electrician and attended Bolton Technical College. He qualified as an electrical engineer and built his company James Industrial, where he has been managing director since 1979.

He said: “It is an absolute privilege for Sharon and me to be here. To receive these awards is not only a true honour for us both, but the University of Bolton bestowing them on us acknowledges and reflects the efforts and achievements of the whole Bolton Wanderers family.” 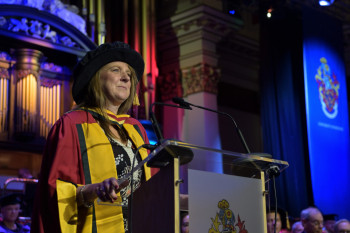 Helen Lowey was awarded the degree of Doctor of Health Care for her outstanding contribution to public health.

For two decades, Helen has made a significant contribution to the NHS and local authorities as a Chief Officer and Senior Manager.

She led the corporate response during the Covid-19 pandemic, for which she was awarded the Faculty of Public Health’s President Gold Medal for Inspirational Leadership.

She said: “It’s a great honour to be here today. The pandemic touched every single one of our lives. Each and every one of you have been affected and will continue to be so.

“The students came together, communities came together. You have had to work in a completely different way, that you had never done before. Staff and students worked together, and the University stayed open throughout. It was absolutely phenomenal.”

Helen added: “I haven’t brought my family today, but I have brought my work family and I am really proud to say the consultants in public health are today to celebrate this award because it really, truly, is a team approach.” 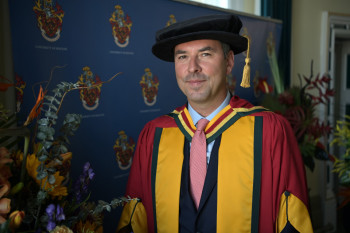 Graduands from the School of Education and Psychology were presented with their degrees throughout the day.

Teodoro Lonfernini - Doctor of Science for his outstanding contribution to Politics. Teodoro, a former Captain Regent – the head of government – for San Marino, has enjoyed a distinguished career in politics. He has worked in a variety of senior roles in the San Marino parliament, including Secretary of State for Tourism. He is currently the republic’s Secretary of State for Labour, Information and Sport. Since 2008, Teodoro has been an elected member of San Marino’s Great and General Council (parliament).