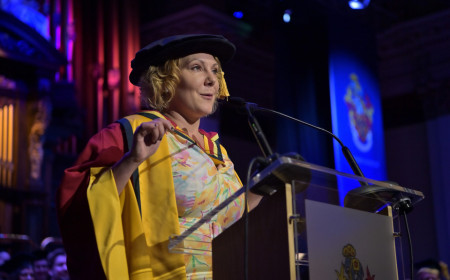 Writer and actress Sophie Willan, creator of the hit TV show Alma’s Not Normal, received an honorary degree from the University of Bolton.

Sophie was presented with the degree of Doctor of Arts for her outstanding contribution to television and comedy.

It was the first day of a week of graduation ceremonies in Bolton’s Albert Halls in the magnificent town hall.

She told students and their families: “It’s fabulous to be here and I just want to say – congratulations, you did it!

“Not only did you get yourself a degree, but you did it in the middle of a global pandemic.” 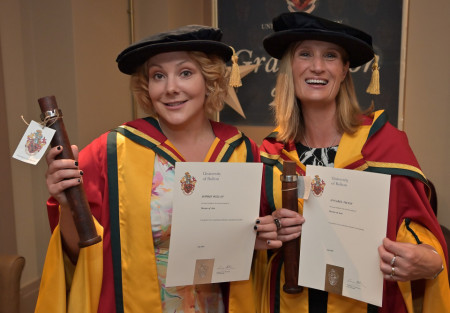 TV journalist Annabel Tiffin, who is a regular presenter on BBC’s North West Tonight, also received an honorary degree as Doctor of Arts for her outstanding contribution to broadcasting.

For the past 4 years, she has been the political editor and host of the region’s Sunday Politics show.

She said: “I am really lucky, I always knew what I wanted to do. If you don’t, I would say don’t worry, it doesn’t matter yet. You have got time to find what you want to do.

“Finally, I just want to say that I didn’t go to university. I chose the long route into journalism.

“I really wish my parents were here because my dad really wanted me to go to university and unfortunately he died during the pandemic but I think he would have loved this and he would have been very, very proud.”

Annabel, who began her career as a trainee reporter at the Stockport Express in 1992, has been nominated for two Baftas and has won numerous Royal Television Society awards. 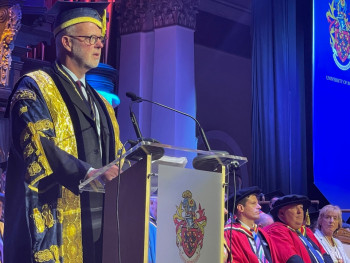 The Chancellor of the University of Bolton, the Earl of St Andrews also praised students’ success.

The Earl said: “It is my pleasure to congratulate you all on this day of celebration. Today is an opportunity to recognise your achievements, and all the hard work, dedication and sacrifice that has brought you here.

“Your generation has come of age at a time of great uncertainty and during the course of your studies you will have embraced virtual learning and kept your focus during an unprecedented public health crisis.”

Research graduands and students from the School of Engineering, School of Arts and Creative Technologies were presented with their degrees throughout the day.

Sophie’s award-winning BBC TV show has been a hit with audiences and critics. The series, set and filmed in Bolton, received three BAFTA nominations in 2022 and won a BAFTA in 2021 for the pilot episode.

“Whatever you do, you are the future, you are the hope, and you have my undying support, love and admiration.” 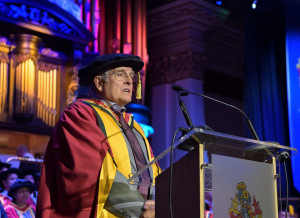 Nick Dudman - Doctor of Innovation for his outstanding contribution to the Creative Industry. Nick is the special effects wizard behind much of the creature magic in the Harry Potter movie series and received an honorary doctorate from the University of Bolton. He is an award-winning makeup effect and creature designer in the film industry, responsible for the much-loved animatronic creatures in all the blockbuster films about the boy wizard, as well the CG scanning and makeup effects. Nick’s remarkable work on the series earned him six BAFTA nominations, and an Oscar nomination for the best makeup for the final instalment, Harry Potter and the Deathly Hallows. His long and distinguished career in the film industry began with a traineeship on the Star Wars classic, The Empire Strikes Back. In 2006, Nick was invited to join the Academy of Motion Picture Arts and Sciences, and in 2007, he was presented with the Canadian Genie Award for Special Achievement in Makeup for Beowulf and Grendel. Most recently, Nick was Makeup Effects Designer on seasons one and two of Legendary’s Carnival Row, and he is currently developing Julian May’s The Saga of the Exiles as a television series. 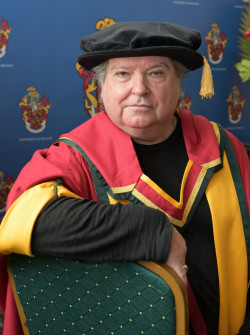 Jonathan Kendrick, the Chairman of the ROKiT Group of Companies, which covers a range of interests, from telecoms and technology to eBikes and animation, received the degree of Doctor of Business Administration for his outstanding contribution to Digital Communications, Industry & Education. ROKiT has also collaborated closely with the University’s pioneering National Centre for Motorsport Engineering (NCME). Born in Wolverhampton, Mr Kendrick was expelled from school aged 15 with no qualifications but rose through the ranks at Goodyear to become a tyre engineer for Formula 1 teams. His ROKiT Foundation has been a committed backer of many charitable causes, including support for British Armed Forces charity Care after Combat, and financing the successful evacuation and temporary rehousing of the Afghan Women’s Junior Football Team and their families. He said: “I am delighted to receive this honour – somewhat shocked, but delighted!” 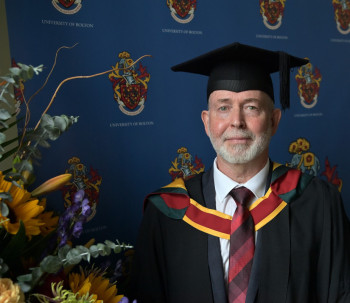 Shaun Buckley - Master of the University for his outstanding contribution to Higher Education. Mr Buckley is a former business support manager at William Northam, the robemakers and photographers who have supported the University’s graduation events for many decades. During that time, he has attended almost every graduation event and worked seamlessly with the University to deliver successful and memorable graduation events together with investiture ceremonies of its executive officers. 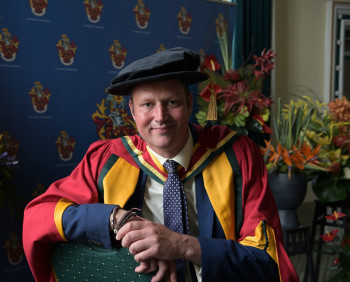 Nick Richardson - Doctor of Innovation for his outstanding contribution to Technology & Data Analytics. Nick is the founder and CEO of The Insights Family, an award-winning technology platform for market research and intelligence focusing on children, parents and families. Today, the company has expanded to 22 countries and has many high-profile clients, among them Amazon, BBC, Disney, Ofcom and Nike. Nick sits on the Children’s Advisory Board of the Information Commissioner Office and is actively involved with the University of Bolton’s Institute of Management. He also sits on the University’s Industry Advisory Board. 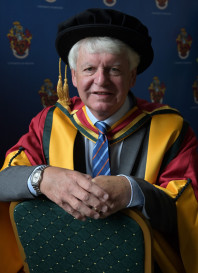 Professor Tom Kennie - Doctor of Education for his outstanding contribution to Global Higher Education. Prof Kennie is the founding director of Ranmore Consulting Ltd, which specialises in strategy, leadership and organisational development for the higher education sector. In 2019, he was appointed an Honorary Visiting Professor at the University of Bolton in the field of Higher Educational Leadership. He currently facilitates a global leadership programme for Senior Dental Leaders (SDL), runs jointly by King’s College London and the Harvard School of Dental Medicine. 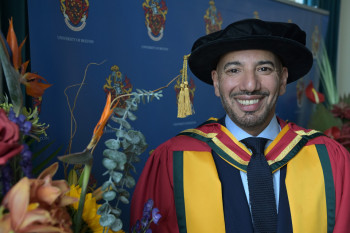 Rehan Hassan - Doctor of Engineering for his outstanding contribution to innovation in the technology sector. Bolton-born Mr Hassan completed his engineering degree at Manchester Metropolitan University and is the founder and CEO of SRH, a private investment management company based in Dubai. He was the recipient of the Masala! Middle East Businessman of the Year award in 2017, and two years later, was awarded one of the highest civilian awards in Pakistan, the Sitara-e-Imtiaz, by the country’s president. 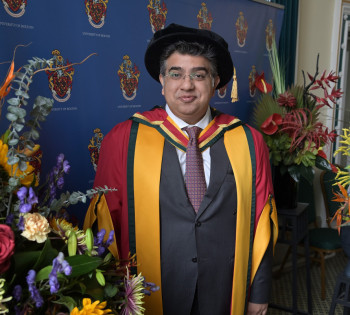 Ali Raza Siddiqui - Doctor of Business Administration for his outstanding contribution to international business and commerce. The Chairman of JS Group and a Partner at JS Private Equity saw the potential of Islamic banking and co-founded Bank Islami Pakistan, which has since grown to become the second-largest Islamic bank in the country. In addition to his entrepreneurial success, he has made a significant contribution to tackling low literacy rates and inadequate healthcare provision in Pakistan, as well as promoting scientific research.