How Does The Ageing Population Affect Social Care

With an ageing population that is showing signs of further growth, our health and social care system could be radically altered. Are we prepared for it?

People are living longer lives all around the planet. Most individuals nowadays may expect to live into their sixties? Or seventies? or beyond. Every country around the globe is seeing an increase in the number and proportion of older people in its population.

According to the World Health Organization's (WHO) Global Health and Ageing Study, "the number of individuals aged 65 or older is anticipated to climb from an average of 524 million in 2010 to an estimated 1.5 billion in 2050, with the majority of the growth occurring in developing nations." Furthermore, by 2050, the number of persons 65 and older is predicted to outweigh children under the age of five.

WHO credits the rapid growth of the older population to a shift in the primary cause of death, from infectious diseases to chronic and non-communicable illnesses, which boosted life expectancy. Hypertension, high blood cholesterol, arthritis, diabetes, cardiovascular disease, cancer, dementia, and congestive heart failure are examples of chronic illnesses that can be now controlled or improved with current medical advances.

So, this begs the question, "What are the consequences of an ageing population for health and social care?"

Maybe people pursuing a health and social care degree will be able to answer this question better but let's dive a little deeper and see what the studies say. 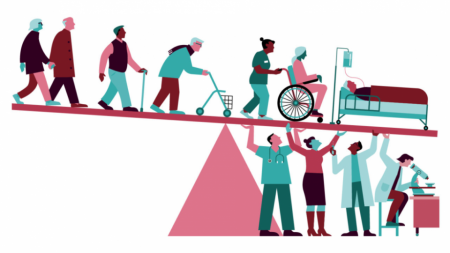 The Effect of the Ageing Population on Health and Social Care

"Baby-boomer" is a word we've all heard. As per the Office of Disease Prevention and Health Promotion, the first Baby Boomers (those born between 1946 and 1964) reached the age of 65 in 2011. According to projections, more than 60% of this demographic will be handling more than one chronic illness by 2030. Handling these chronic diseases, as well as a patient's level of handicap, will place an additional financial strain on our health and social care degree systems. The cost rises with the number of chronic disorders needed to be treated, with Baby Boomers anticipated to have twice as many hospital stays and doctor visits by 2030.

According to the WHO research, some people assume that as life expectancy rises, the rate of disabilities will fall because medical advances will halt illness transition from chronic disease to disability. As a consequence, there will be fewer people with severe disabilities, but there will be more people with lesser chronic conditions. On the other hand, other studies feel that as life expectancy rises, so will the prevalence of impairment.

With an ageing population, some health issues are projected to pose a challenge to our health and social care system. Cancer, dementia, a rise in the incidence of falls, obesity, and diabetes are among these conditions.

The number of cancer cases has grown to 17 million by 2020 and is predicted to rise to 27 million by 2030 as the population ages.

The prevalence of dementia is predicted to rise in tandem with the ageing population. Alzheimer's Disease International predicts that by 2050, there will be 115 million people worldwide suffering from Alzheimer's disease/dementia. According to the organisation, a sizeable part of the 115 million will live in less developed nations.

With falls among the leading causes of injury in the elderly, our health and social care system is anticipated to be tested. This is due to the fact that Baby Boomers are living longer lives, staying active, and maybe taking drugs for conditions that may cause falls.

The number of people who are labelled obese will continue to rise, putting a strain on our health and social care system. Obesity/overweight is not only a contributing factor to numerous health disorders, but it is also quite expensive: obese people cost the Healthcare system around 34% more than normal-weight patients.

As the overall population ages, so does the number of persons 65 and older who have diabetes. Diabetes affects around 33% of persons aged 65 and over. This demographic is more likely to suffer diabetes-related problems such as hypoglycemia (low blood sugar), renal failure, and heart disease than younger diabetics. 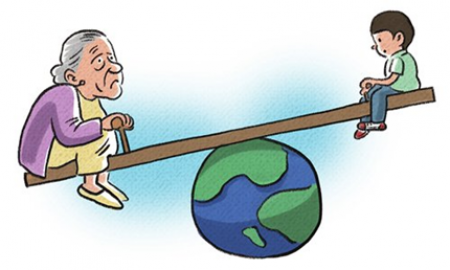 Population ageing has prompted concern about the possibility of rising medical expenditures and long-term social care degree jobs and services for the elderly, as well as an imbalance between those of working age and the elderly due to shifting dependence ratios. As the senior dependence ratio rises, it is expected that individuals will become increasingly reliant on social care services. In contrast, healthcare demands will rise due to the problems associated with old age.

Due to demographic shifts, healthcare spending is predicted to rise considerably between 2016 and 2070. Increases in spending are expected to be driven by advances in lifespan that do not result in improvements in individuals' health quality, resulting in an increase in demand for healthcare services. Here are some predicted challenges that the health and social care degree system can face in the upcoming months or years:

·         The demand and need for resources will continue to rise across all healthcare settings.

·         It is forecasted that there will be a scarcity of health care personnel.

·         There may be a shortage of care workers due to the ratios of the age demographic.

·         Care has been centred on a particular disease rather than treating comorbidity.

·         Adapting to and adopting the Affordable Care Act seems to be complicated. 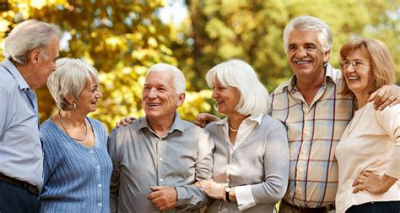 How can the Health and Social care sector address the expected challenges?

The health and social care system will have to brace for the rising prevalence of chronic diseases in the ageing population, as well as implement fall-prevention techniques. Implementing innovative ways in health care delivery to accommodate the changing health condition of an ageing population is a significant problem. As the prevalence of chronic illnesses among this group rises, their healthcare needs become more complicated. Focusing on a particular ailment rather than comorbidity may result in a lack of attention to other current medical issues.

Instead, the health and social care degree system must prepare to deploy a multidisciplinary strategy to provide better case management for patients. There should also be an emphasis on delivering preventative treatment rather than reactive therapy. A more thorough treatment plan before discharging, a system to assist recognise patients who need follow-up, and the development of a programme to help monitor patients are all possible strategies.

While greater longevity and better health at older ages are recognised in many areas of the globe as one of the twenty-first century's crowning achievements, these changes also pose substantial problems. Economic development, employment and retirement patterns, family functioning, governments' and localities' capabilities to provide enough resources for older persons, and the frequency of chronic disease and disability can all be influenced by societal ageing.

Hear from our Health and Wellbeing Expert

Jobs in Health and Social Care / Social Work: Why a Master’s Degree Matters

Hear from our Health and Social Care Expert